Even though the Slovak Republic is a relatively young state and its sovereign parliamentary tradition had only started developing in the 20th century, the implementation of the idea of democratic representation of Slovaks has deeper roots.

For centuries, the territory of today’s state had been a part of the multi-national Kingdom of Hungary, in which it never formed an autonomous area. Nevertheless, it maintained its significance throughout this time. From 1536 – 1848, the Hungarian Estates’ Assembly had its seat in Bratislava. In 1847, Ľudovít Štúr, representing the constituency of Zvolen, became the first Slovak Member of Parliament. Especially thanks to him, the history of Slovak parliamentarianism is closely connected with the struggle of Slovaks for their national identity and state sovereignty, as well as for civil and social rights.

The tradition of current Slovak parliamentarianism goes back to the historical first Slovak National Council. It had been constituted on 16 September 1848 at an assembly of 2007 people in Vienna. The first Speaker of the Slovak National Council was Jozef Miloslav Hurban, assisted by other members of the Council gremium – Ľudovít Štúr and Michal Miloslav Hodža. From 1848 – 1849, this highest political body, with a seat in Myjava, also acted as the government and stood at the forefront of armed volunteer fights against Hungarian domination and in support of the national political demands set out in a manifesto entitled The Demands of the Slovak Nation. The Slovak National Council proclaimed its independence in an effort to obtain autonomy within the monarchy. From 1869 – 1918, Slovaks were represented in the Lower Chamber of the Hungarian Assembly by elected Slovak MPs (their exact number fluctuated from zero to seven); the first Slovak political parties were also founded in this era.

In 1847 Ľudovít Štúr ran for a seat in the Hungarian Diet and got elected as its deputy for the central Slovakian town of Zvolen.

On September 15-16, 1848 the Slovak National Council was created in Vienna as a Slovak political body during the revolution of 1848 At its head stood its political leadership trio represented by Ľudovít Štúr, Jozef Miloslav Hurban and Michal Miloslav Hodža. The body organised the Slovak Uprising in 1848-1849 within the Revolution of 1848, as well as executive power in parts of Slovakia occupied by united Austrian-Slovak forces. The first meeting on the territory of Slovakia was in Myjava where the first national gathering of Slovaks took place on 19 September 1848. Ľudovít Štúr declared the independence of the Slovak nation from Hungary at the gathering. However, the Slovak National Council administered only Myjava and its surroundings and the volunteers were defeated after a few days. The Slovak National Council ceased to exist in the autumn of 1849, after the revolution had been suppressed.

On 30 October 1918, the Slovak National Council – the highest representative body of Slovak nation – declared separation from Hungary and establishment of the Czechoslovak Republic. 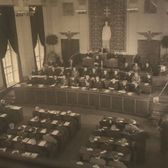 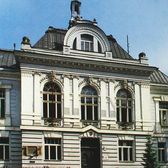 On February 4, 1945 the Slovak National Council issued a manifesto for the liberated territory on new political, economic and nationality relationships in liberated Czechoslovakia.

Slovak parliament approved the Agreement on the Accession to the European Union.

The National Council of the Slovak Republic passed the law on introducing the euro on January 1, 2009