The Czech republic has a very rich parliamentary and state history. The following overview presents the most important events that characterise the modern development of Czech parliamentarism.

Publication of the first imposed constitution (the Pillersdorf Constitution) by the Austrian government. The Constitution foresaw a bicameral system of Parliament (the Imperial Diet), composed of a House of Deputies and Senate.

Publication of the third imposed constitution (the February Patent, the Schmerling Constitution) which included several annexed patents (no. 20-22/1861 Coll.). These documents provided for the establishment of a bicameral Imperial Parliament, composed of a House of Deputies and a House of Lords. Representatives to the House of Deputies were to be appointed from the provincial Diets, whereas representatives to the House of Lords were appointed by the Emperor.

Publication of a new electoral law for elections to the House of Deputies of the Imperial Parliament. The entire territory of the Empire was divided into electoral ridings, each representing one mandate. From the total number of members in the House of Deputies (516), 130 mandates were elected in Bohemia, 49 in Moravia and 15 in Silesia.

Women and members of the armed forces did not yet have the right to vote. The curial electoral system for elections to the provincial Diets remained in force. 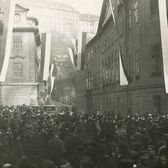 Establishment of the independent Czechoslovak Republic. Legislative and executive power was wielded by a National Council composed of 30 members who proportionally represented political parties that had been elected to the House of Deputies in Bohemia, Moravia and Silesia in the Imperial elections of 1911.

The National Assembly approved Act no. 121/1920 Coll. which established the Constitution of the Czechoslovak Republic.

This Constitution reflected the traditional division of powers and legislative power was to be wielded by a bicameral Parliament (The National Assembly) composed of a Chamber of Deputies and Senate. 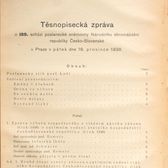 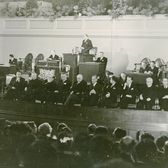 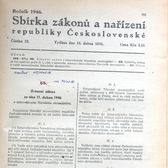 Constitutional Act no. 135/1989 Coll. was approved by the Federal Assembly, which abolished the leading role of the Communist Party.

Elections to both chambers of the Federal Assembly and to both National Councils were held on the basis of a universal, equal and direct right to vote. 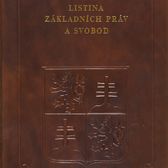 The Federal Assembly approved Constitutional Act no. 23/1991 Coll., establishing the Charter of Fundamental Rights of Freedoms.
This Charter was to later form part of the constitutional system of the independent Czech Republic.

The Czech National Council approved the Constitution of the Czech Republic (Constitutional Act no. 1/1993 Coll.).

The independent Czech Republic was established on the basis of the Constitution of the Czech Republic, which entered into force on January 1, 1993.
The Constitution reflects a parliamentary system of government, where legislative power is wielded by a bicameral Parliament composed of a Chamber of Deputies and Senate.

The current Chamber of Deputies was established on January 1, 1993 and was initially composed of the Deputies who had been elected to the Czech National Council.
The Senate, however, was established only after the first elections to the Senate were held in 1996.