1815 - Central Europe after the Napoleonic wars.

The map of Central Europe in the mid-nineteenth century illustrates the dominance of the Austrian Empire, which was composed of not only Austrian territories, but also of the Czechlands, Lands of the Crown of Saint Stephen (Hungary), part of the divided Polish territories and of extensive territories in the Apennine Peninsula. Poland, as a unified state, did not exist at the time.

Central Europe was also influenced by Russia, which ruled over the eastern part of the divided Polish territories and which gradually sought to limit the autonomous position of the Kingdom of Poland (Congress of Poland) within Russia. The map further illustrates the superpower-style ascent of Prussia, which, after gaining part of Silesia, further expanded its territory to include the western part of the Polish territories. The border of the German Confederation, which had been created after the Napoleonic wars within the territory of the former Holy Roman Empire, is indicated on the map in red. The hectic situation during the 1848/1849 revolution was the cause of frequent territorial changes. The map depicts the temporary loss of Austrian holdings in the Apennine Peninsula and the unification of Italy. Besides the efforts to unify Germany and Italy, representatives of the various ethnic nations united within the Austrian Empire also made political demands during the 1848 revolution. Ethnic-national disputes became a permanent problem in Central Europe. The map illustrates the transformation of the Habsburg monarchy into the double monarchy of the Austrio-Hungarian Empire in 1867. Another important change was the creation of a unified Germany in 1871 and the unification of Italy. Poland continued to be divided between the Austrio-Hungarian Empire, Germany and Russia. The new independent states in south-eastern Europe, within the former territory of the Ottoman Empire, are also visible in the map. Central Europe, on the eve of the First World War, was dominated by two extensive empires – the German and the Austrio-Hungarian empires - which were both troubled by ethnic-national disputes. Both empires were to become allies in the First World War. 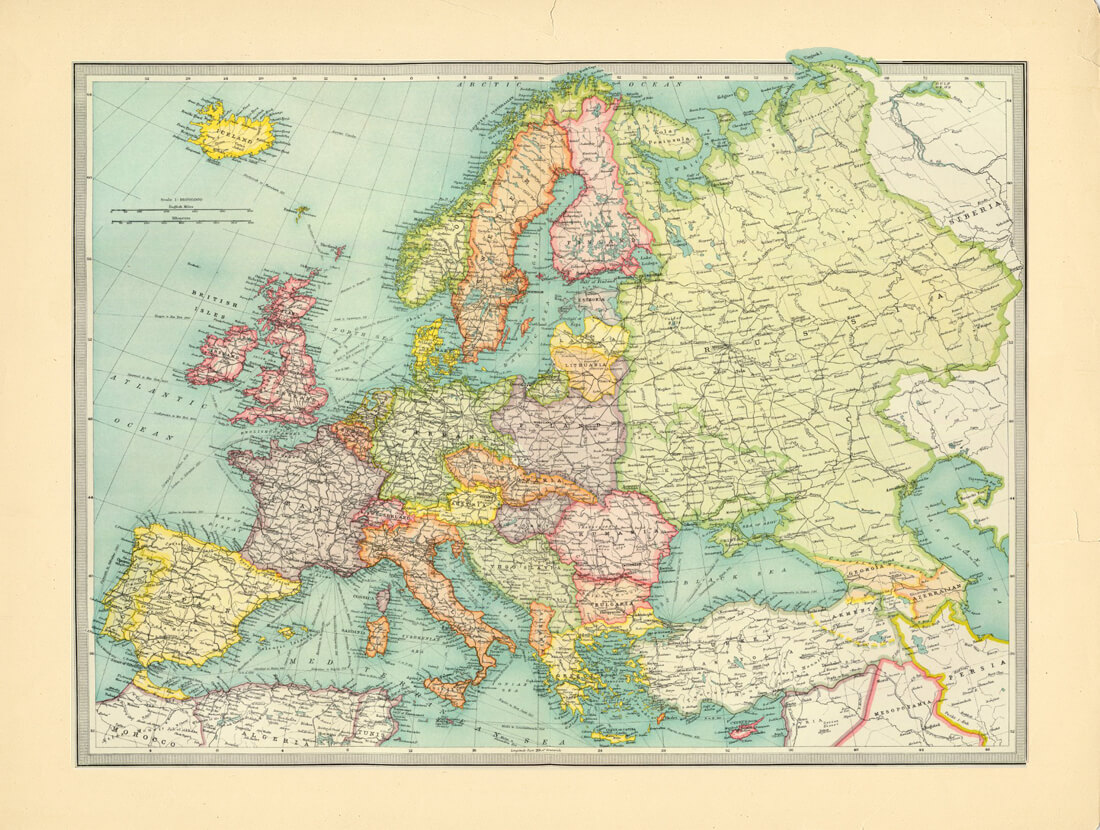 1922 - Europe between the two World Wars

The defeat of Germany and Austria-Hungary in the First World War gave rise to the Versailles System, which fundamentally transformed the landscape of Central Europe. In place of the expansive Habsburg monarchy, troubled with ethnic-national conflicts, successor states were established. Certain states succeeded into previous traditions of statehood, while certain nations could not rely on such historical traditions. The map illustrates the diminished territory of Austria and Hungary. Czechoslovakia was newly established, as a common state for Czechs and Slovaks, and Poland was reestablished as a state, but had to initially defend its eastern border against the expansive Bolshevik Russia. The post-World War I peace agreement, the Treaty of Versailles, maintained peace in Europe only for two decades. The situation in Central Europe was influenced by the rise of Nazi Germany requiring revision of national boarders drawn after the World War I. The disquiet in internal politics of individual states was being intensified by the rise of authoritative regimes. Political changes taking place in 1930s in European countries had an impact on the geography of the old continent. The map from 1938 showed the “anschluss“ of Austria by Nazi Germany (March 1938). Soon after that, another revision of national boarders took place when Czechoslovakia was forced to concede a part of its territory to Germany on the aftermath of the Munich Conference (October 1938) 1943 - Europe during the Second World War

The situation in 1943 illustrates the annexation of Austria and parts of Czechoslovakia and Poland to Germany. Germany further exercised direct control over the Protectorate of Bohemia and Moravia as well as over the territory of the General Government in part of the Polish territory. The eastern part of Poland was occupied by the Soviet Union. Slovakia was an independent republic during the war and Hungary enlarged its territory. 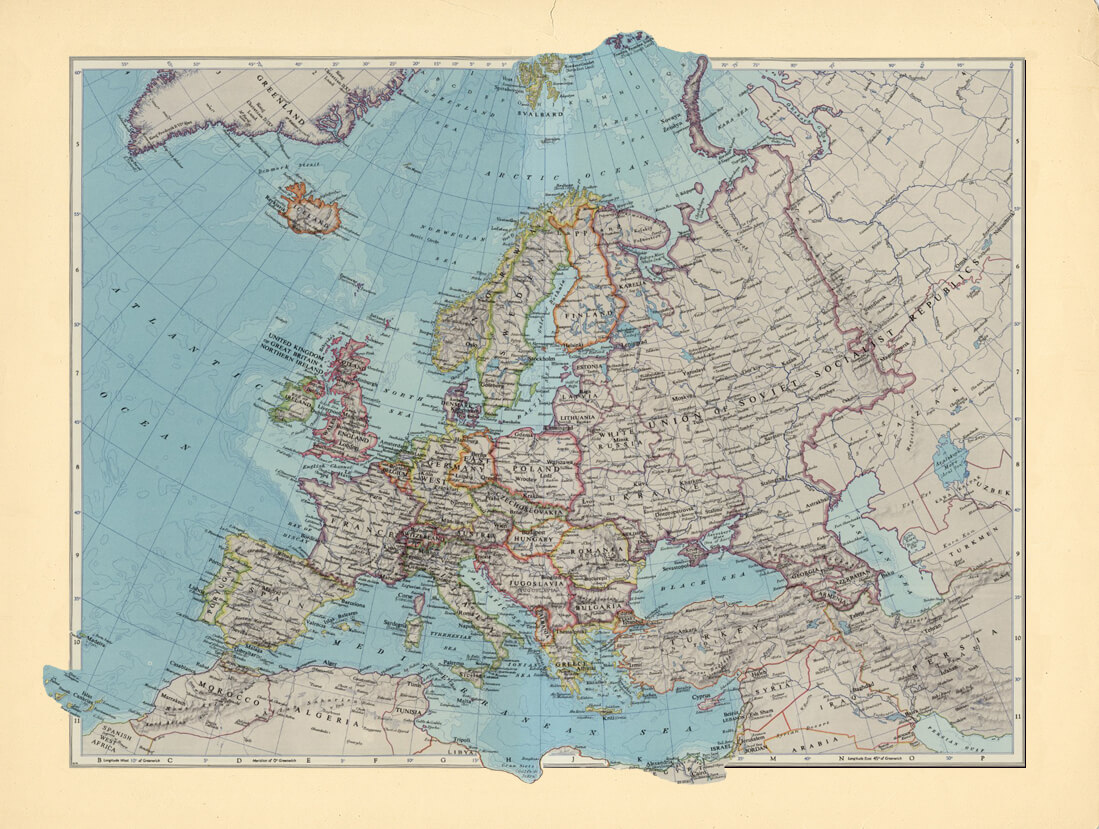 1950 - Europe after the Second World War

The end of WWII brought about significant geopolitical changes in Central Europe. Poland's borders were redrawn. In the east, Polish territory gave way to the territorial expansion of the Soviet Union and in the west, Poland's territory expanded to newly cover parts of what had formerly been eastern German territories. Germany was initially divided into American, British, French and Soviet sectors. In 1949, the Federal Republic of Germany was created out of the western sectors, whereas the territory of the Soviet sector became the German Democratic Republic. Initially, Austria was similarly divided, but in 1955, its statehood was fully renewed and Austria became a neutral state. The most important piece of information is missing from the map - Central Europe was to be divided by what became known as the Iron Curtain, which separated democratic states from states under absolute Soviet influence. In Poland, Czechoslovakia and Hungary, a 40 year communist experiment was about to begin. The demise of the communist bloc initially brought about a change in the political systems in the post-communist states of Central and Eastern Europe. The iron curtain between the West and the East was lifted and after more than 4 decades, the Federal Republic of Germany in the west and the German Democratic Republic in the east were reunified into one German state. The transformation of the political regimes in the former communist bloc states brought about the need to address ethnic national questions. Czechoslovakia peacefully divided at the end of 1992 into two independent states – the Czech Republic and the Slovak Republic. After the dissolution of the Soviet Union, its component states obtained independence. The road to independence of the nations in the territory of the former Yugoslavia was more dramatic and gradually resulted in the creation of the independent states of Slovenia, Croatia, Bosnia and Herzegovina, Macedonia, Serbia and Montenegro. The transformation of the European continent at the turn of the millennium was the result of the integration process to the European and Transatlantic bodies. Perception of boarders and geopolitical grounding of individual states have changed. In 1999, Czechia, Poland and Hungary became members of NATO. In 2004, Estonia, Latvia, Lithuania, Slovakia, Slovenia, Bulgaria and Rumania followed. In 2004, substantial enlargement of the European Union took place when Czechia, Estonia, Cyprus, Lithuania, Latvia, Malta, Hungary, Poland, Rumania, Slovakia and Slovenia became its members.